"Keep your elbows off the table!"

How many times have we heard this chant as we sat in a summer camp dining hall or junior high cafeteria? According to my middle-school sources, it's still considered a terrible faux-pas to put your elbows on a dining table, and kids, I guess, still chant about able Mable.I've been wondering if this is really still seen to be a defining characteristic of a boor: resting one or more elbows on the table while eating or while waiting between courses. Last night, we ate at West End Grill, a pleasant, pretty fancy restaurant in downtown Ann Arbor. It's a fairly popular place, despite rather high prices, and was reasonably full even on a rainy Wednesday. We enjoyed our food, and enjoyed the leisurely service.It was definitely NOT A HORSE'S STABLE, but a first-class dining table.

In fact, our table was in the center of the restaurant, which has one large dining area and a bar where they also serve food. From my seat, I could see about half the other tables, and I realized that I could unobtrusively observe quite a few diners: men in suits, women in reasonably nice clothes, dressed up by local Ann Arbor standards. I would guess that around half the tables were filled with professors entertaining speakers from other institutions, and the rest with couples like us, treating themselves to a good meal.When we were waiting for our various courses, I realized that I could check up on the other diners, and see who was obeying or violating the elbow rule.At almost every table I observed, at least one person had elbows on the table. Yes, men in sport jackets (didn't see any ties) rested their elbows on the table between courses. A woman in quite a nice outfit was eating with her elbows on the table. A man at the bar had the elbow of his drinking arm on the bar surface. Adults of all ages were included in my little sample. I'm not sure a single diner was innocent of this questionable act, though I think most did so only between courses.If people who have dressed up to dine at such a formal place don't keep their elbows off the table, then when in the course of life in our admittedly permissive society does anyone actually observe the rule?I spent a few minutes checking etiquette advice online. Most experts (whether self-appointed or professionals) suggest avoidance of elbows on the table, for the sake of tradition. Some point out what we found out many years ago: the rule is different in other countries, notably in France, where it's absolutely polite and standard to rest elbows on the table because your hands are supposed to be in sight at all times while dining. A few say that the rule has changed, and that American and British etiquette only requires elbow-absence during, not between, courses. I think my fellow diners last night illustrate that times have changed, though formal rules may persevere. I also think the no-elbow rule will survive because it's just too much fun to chant about Mable.

For all my food posts, including this and also my non-Ann Arbor food posts for this month, see October.

The season for wonderful Michigan vegetables is rapidly drawing to an end. Today we drove west towards Manchester, viewing the stunning fall leaves, stubble fields and fields of dried-up cornstalks, and the migration of various birds. We stopped at Fusilier's Farm Market on Herman Road, where there's a haunted corn maze and many pumpkins, some decorated, others waiting for customers who will decorate them. 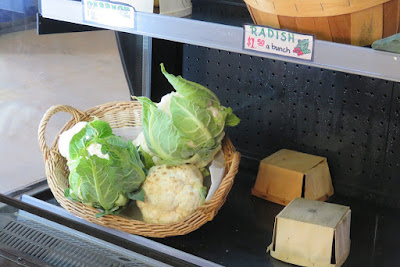 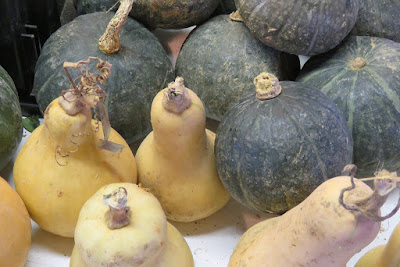 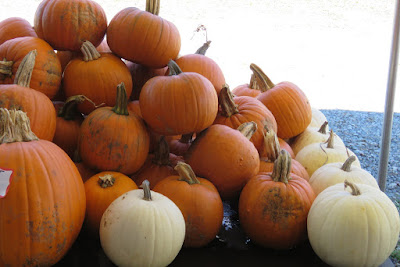 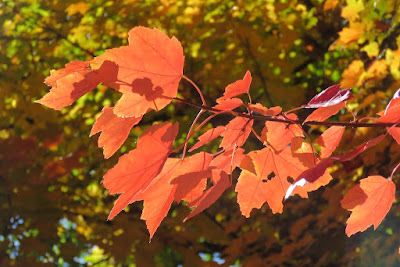 I've lived in the Burns Park School district in Ann Arbor for a number of years. Recently, a lot of news articles have discussed federal regulations concerning school lunches and how they have been implemented and received in schools throughout the country. These have made me curious about the lunch program at Burns Park and throughout the Ann Arbor Public Schools (AAPS). So I received permission to visit and observe the lunch hour at Burns Park.

Chartwells also participates in the "Farm to School" program using Michigan growers to supply produce; the program also sponsors school vegetable gardens. Today's apples came from one of several Michigan orchards and cucumbers from Ruhlig Farms in Carleton, MI. "Using local food in our school food service also supports local and regional farms in their efforts to be sustaining contributors to our local economy. Chartwells provides Michigan-grown produce in all AAPS cafeterias," says Heather Holland, Director of Dining Services, AAPS.Meals at Burns Park School are mainly prepared in a small kitchen adjacent to the cafeteria. For example, the hot dogs were heated in the oven and placed in buns by a Chartwell's employee, who also dishes out the hot dogs and corn to the lunch line, and replenishes the fruit and vegetable bar. If the menu included stovetop preparations, such as boiling pasta, the cooking would be done at the larger, more fully equipped kitchen at Pioneer High School around a mile away, and brought to Burns Park for final prep. Both breakfast and lunch are served in the cafeteria, but I only visited at lunchtime.School meals, as I mentioned, get a lot of attention nationwide -- especially the requirement that fruit and vegetables be a major part of school nutrition programs, which became Department of Agriculture policy in 2012. A recent article in the New York Timessaid:

"Food and nutrition directors at school districts nationwide say that their trash cans are overflowing while their cash register receipts are diminishing as children either toss out the healthier meals or opt to brown-bag it. While no one argues that the solution is to scrap the law and go back to feeding children junk, there’s been a movement to relax a few of the guidelines as Congress considers whether to reauthorize the legislation, particularly mandates for 100 percent whole grains and extremely low sodium levels, so school meals will be a bit more palatable and reflective of culinary traditions." ("Why Students Hate School Lunches," Kate Murphy, September 26, 2015) 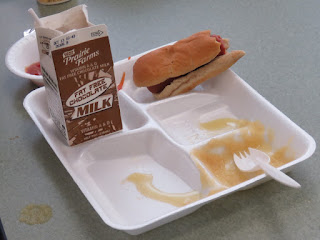 Reporters and authors of studies of school meals seem to me to be somewhat obsessed by the topic of children throwing away the fruit and vegetables from their lunches. At Burns Park School, I did see kids eating only part of their lunch -- some left the hot dog, some left the bun. I saw a lot of the corn being left on their trays and discarded. But I also saw them eating and seeming to enjoy applesauce, apples, and also cucumbers, which they were dipping in ranch dressing. I saw only one child take a portion of chickpea salad from the vegetable and fruit bar. Quite a few kids were going back for seconds: unlike many school districts the Ann Arbor program allows return visits to the lunch line for more fruit and vegetables -- but not more hot dogs.While a lot of fruit and vegetables from the lunch trays did go in the trash, I also saw a lot of kids throwing away whole wrapped items or half-eaten items from the lunch boxes they brought from home. And I wonder: is this just the way kids act when no one is coercing them to clean their plates?Another recent article illustrates the focus on food thrown away rather than on food that's eaten: they observed that more fruit and vegetables were tossed away now -- more than before the program started. As far as the article reported, the study didn't actually observe what the kids ate, only what they wasted. ("Children Tossing School Lunch Fruits and Vegetables,"Nicholas Bakalar, New York Times, September 7, 2015)As the kids finish lunch and dump their trash, they are supposed to sort the recyclables from the other garbage. In a few weeks, when everyone is more adjusted to the new school year, Principal Chuck Hatt says there will be fifth graders wearing gloves who serve as the "Green Team" helping to keep the cafeteria clean and make sure the trash is properly sorted.

Could the food be better? Healthier? Tastier? I'm sure it could, but I'm not sure how much better, considering the constraints of pleasing varied tastes and backgrounds, meeting government mandates, using USDA donated food (which is covered in the AAPS-Chartwells contract, though I don't know any details), and meeting very stringent cost requirements. I think the trend away from junk food in schools is overall a good one. 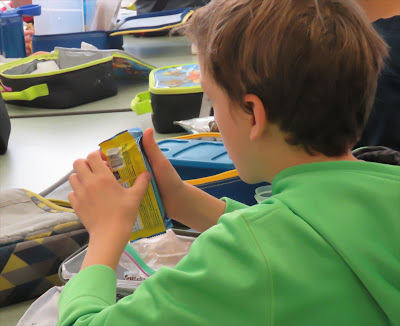