The Fair Food Network (FFN), an Ann Arbor nonprofit, is enabling many people of limited means to accept this frequently offered advice:

Good advice – but families on a limited budget are often discouraged by the extra time and expense to buy, prepare, and eat fruit and vegetables, especially from farmers’ markets. Families receiving government assistance via SNAP (Supplemental Nutrition Assistance Program, formerly known as Food Stamps, now provided through an EBT debit card) have often found the difficulties overwhelming. Most farmers’ markets in the past didn’t even accept SNAP’s EBT cards. 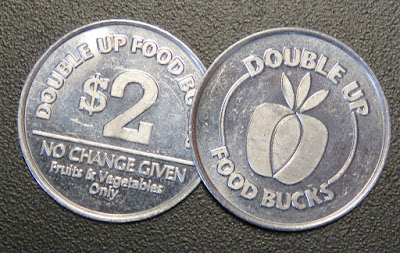 FFN has developed a program called Double Up Food Bucks to offer SNAP users access to numerous Farmers’ Markets and to match their purchases dollar for dollar – doubling what they can buy. The program began in 2009 at five Detroit markets. In 2014, SNAP users supplemented by FFN funding spent over $1.8 million dollars at Michigan farmers’ markets, and will spend even more this year.To learn about the program I interviewed Emilie Engelhard, FFN Communications Director, at the FFN offices in downtown Ann Arbor. Its success, she says, shows that large number of SNAP users really want to put more fruit and vegetables on their family menus. And many would like to support local farmers. A win-win-win situation!How does it work? Let’s say you have a SNAP EBT card. If you want to shop at the Ann Arbor Farmers Market, Emilie explained,you CAN use your card to purchase fruit and vegetables, thanks to the leadership of the MI farmers Market Association.Your SNAP-paid produce purchases up to $20 can be matched in tokens – the Double-up Food Bucks – available at the Farmers Market office. Each token is worth $2. You can use them for more fruit or vegetables immediately, or keep them for another day. And they are also good for buying more produce at many other farmers’ markets in Michigan and the Toledo, Ohio, area. 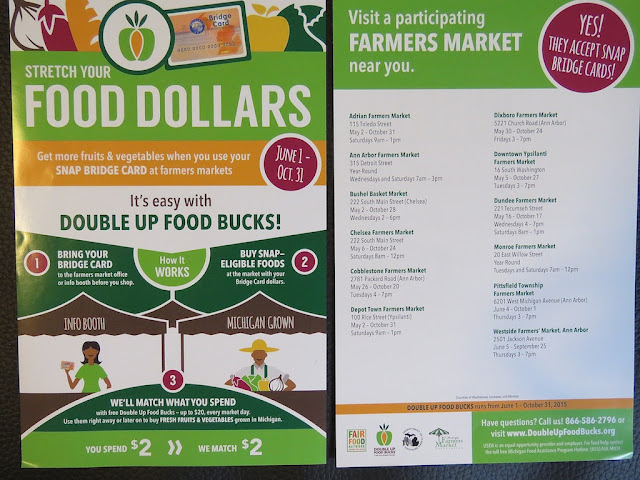 The FFN program is also expanding to some supermarkets in Michigan that have agreed to be part of the healthy foods effort. Even the Whole Foods in downtown Detroit is developing such a partnership. One important feature of the FFN programs is that they exist on a large scale, with many markets and many participants throughout Michigan and in several other states. Much of the infrastructure for the programs is thus shared widely for greater economy of the efforts of the Ann Arbor staff.I asked Emilie whose money is providing the extra fresh produce dollar for each SNAP dollar spent? She replied that Double Up Food Bucks and other incentive programs have historically been supported by private donations, including incentive funds, program administration, evaluations, etc. Recently, government support for SNAP produce buying also has increased. The 2014 Farm Bill, allocated with bi-partisan support, included a new federal program to encourage purchase of fruit and vegetables by SNAP users. This new $100 million program, titled the Food Insecurity Nutrition Incentive Grant Program (FINI), has provided grants to a number of organizations.A FINI grant for $5.1 million, awarded to FFN in March of 2015, will allow substantial expansion of Double Up Food Bucks -- already the largest in the country for encouraging SNAP use for fruits and vegetables. Because FINI requires matching funds, philanthropic and other dollars will also be needed to continue providing support for FFN programs.Under the FINI grant, FFN has several new projects in development. One plan is to explore how to expand SNAP access beyond the Michigan growing season. By December, as anyone knows, not much local produce except potatoes, squash, and apples is available in stores, and most farmers’ markets are closed or nearly closed.FFN is looking into ways to to expand the program in Michigan to more farmers markets, help markets adopt mobile technology, and increase program use in up to 50 grocery and small food stores.

Everyone used to know why advice that SNAP users should eat more fruit and vegetables wasn’t practical advice. Fruit and vegetables, though healthy, cost more per calorie than processed food or meat. They spoil easily and often require preparation. Quality varies, especially at small stores. Shopping at a farmers’ market requires transportation, time, and extra money. But FFN has made great progress and continues to work to overcome these obstacles for many SNAP participants.To learn more about FFN, check their website,http://www.fairfoodnetwork.org/-- and don’t miss their links to stories from NPR, the New York Times, and other important sources,http://www.fairfoodnetwork.org/connect/blog.

"Dining Out" -- Exhibit at Hatcher Library

Besides display cases with menus from every state, the exhibit's hanging panels feature distinguished chefs and their restaurants, collections of menus and memorabilia from Ann Arbor restaurants, and documents from the California food revolution, especially Alice Waters' Chez Panisse restaurant where Jeremiah Tower was a chef. Also there are menus from famous New York restaurants, menus from railroad dining cars and ocean liners, books about menu design, and many other fascinating themes.

Exhibit organizer is Jan Longone, adjunct curator of culinary history at the library. Documents on display include many that she had donated from her extensive collections, now in the Janice Bluestein Longone Culinary Archive (JBLCA). Two display panels based on her donations are titled "Conserving Catalan Cuisine." These describe Jan and her husband Dan's experiences at El Motel Hotel and Restaurant in Figueres, Spain, and particularly photos and other items from the restaurant's 50th anniversary gala in 2011. Jan and Dan enjoyed "local, traditional, and seasonal foods" prepared from game, fresh fish, wild mushrooms and more by three generations of a family of restaurateurs. Salvator Dali, a patron of the restaurant, designed several of the menus on display.

“Dining Out: Menus, Chefs, Restaurants, Hotels & Guidebooks,” runs from August 20 through December 17, 2015, at the Clark Library on the second floor of Hatcher Graduate library. A related lecture by Jan Longone takes place on November 12.

This morning at the Farmers' Market

I managed to get to the Farmers' Market before 8 AM when shadows were still long and crowds not yet dense.I've written about it many times before. Two weeks ago in Kona, Hawaii, I was seeing rambutans,pineapples, super sweet ripe mangos, and local coffee -- it's different here, but it's always wonderful. 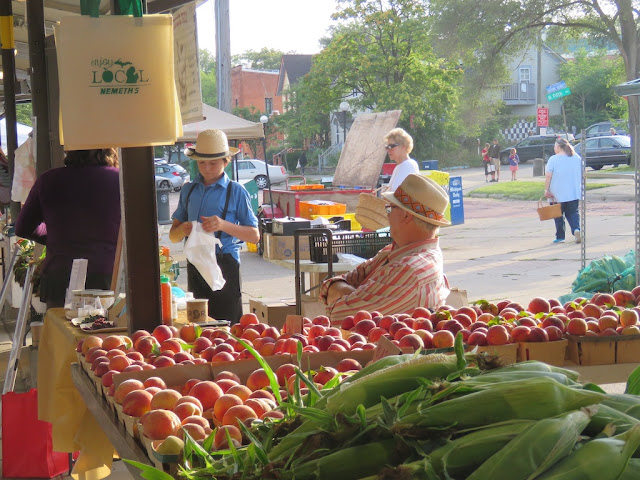 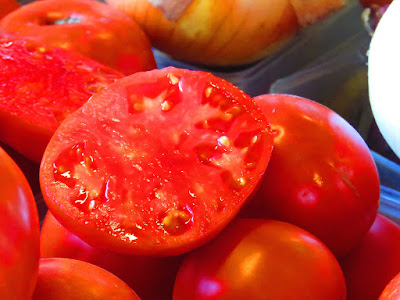